Faithful to her passion for seeking out rare musical gems, Angèle Dubeau presents Portrait: Alex Baranowski, the sixth opus in her series of recordings dedicated to living composers, which began in 2008 with Portrait: Philippe Glass. It’s available online and on CD starting October 14.

The album includes several of Baranowski’s most important works, along with three world premieres, including Wiosna, a commission that Baranowski describes as one of his most intimate compositions. For this album, the composer reworked and arranged all the compositions especially for Angèle Dubeau and her orchestra, La Pietà. Built around the concept of a portrait of a great composer, the recording is an opportunity to discover the work of a rising star of contemporary classical music, performed by one of the great virtuosos of our time and her remarkable all-women ensemble.

“When I first heard his work, it was immediately clear to me that he wrote superbly for violin and that his catalogue merited exploration. What I found was beautiful, generous, and varied music, rich in its soundscapes and wondrously expressive.” – Angèle Dubeau, O.C., C.Q., O.M., DFA.

Alex Baranowski is a young, successful, award-winning composer based in London. His beautiful, generous, and atmospheric works reveal a wonderfully expressive and sensitive writing for the violin, as performed breathtakingly by Angèle Dubeau and her unique ensemble, La Pietà.

“How to celebrate La Pietà’s 25th anniversary?The answer came quite naturally: music. An album entirely conceived of, played, and composed by women. The title – the singular ELLE  – because each woman is unique. ”
– Angèle Dubeau

Violinist Angèle Dubeau‘s catalog of recordings has now reached the impressive number of 150 million streams on streaming platforms such as Apple Music, Spotify and Deezer.

“I admit that I am litteraly awestruck by what I’m hearing.“

“An initiative that is so original.“

Following the undeniable success of Les Dames du Lac in the summer of 2020, two concerts on water that were magical, a strong demand has built up to repeat the event in 2021. Therefore, again in the majestic setting of Mont-Tremblant, two unforgettable concerts of Les Dames du Lac will be presented by violinist Angèle Dubeau accompanied by the 9 musicians of La Pietà performing a new musical program. These events, imagined by Angèle Dubeau in the context of the pandemic, will allow spectators to listen to high-quality musical performances aboard their own watercraft (canoe, kayak, paddleboard, etc.) while respecting social distancing measures.

The free concerts will take place on:

These free concerts are made possible thanks to the generous support of three loyal partners, Ville de Mont-Tremblant, SODEC and Québecor. We also wish to thank the Lac Tremblant and Lac Mercier Associations as well as the Hotel Quintessence, the Centre Nautique Pierre Plouffe-Tremblant and Brian Arnott for their exceptional collaboration.

Depending on the evolution of the pandemic context, the organizers reserve the right to restrict the number of watercrafts allowed on the lakes. As well, all watercrafts must have been washed beforehand. We urge the public to respect the social distancing guidelines issued by the government. We ask anyone with COVID-19 symptoms to not to attend these concerts. 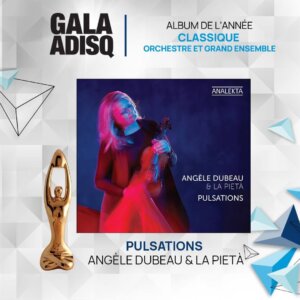 Analekta, in collaboration with the International Festival of Films on Art (the FIFA) and ID Vision Films II, is proud to announce the world premiere of Angèle, Virtuoso as the closing film of Montreal’s FIFA on Saturday, March 30.

Visually expansive nature and urban landscapes frame an intimate portrait of Angèle, not only as a highly accomplished violin virtuoso, but also as a conductor of her all-woman chamber orchestra. The documentary showcases collaborators, family as well as industry experts who provide a framework to understand her unique musical gifts and contribution to the music industry in Canada and abroad.

Visit the website of the International Festival of Films on Art to learn more about the documentary or buy your tickets.

Visit AngeleDoc.com to download the press kit (in French).